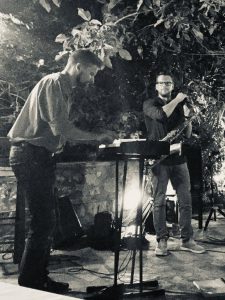 Matthieu Durmarque is a tenor, alto and soprano saxophonist born in France in 1986. He started to learn this instrument in local music schools before deciding to become a professional musician. He has had the opportunity to study and graduate 3 high schools of music: Metz Conservatory, Didier Lockwood Center, with a Masters in composition from the Lausanne Conservatory. At the same time, he began to play with different bands, in particular with BB King’s drummer group for one year. Interested and inspired by many musical styles, he plays with various bands, including No Square Jazz Quartet for now 8 years, with whom he tours annually around the world, recently South America, Australia, and New Zealand, China, Europe and this year Japan and Israel.

At Vlatos these two friends have the opportunity to back to their roots of Broadway jazz standards in their unique improvisational style together.